October 18, 2010 is the 25th anniversary of Genentech's first product approval.

Twenty-five years ago, on October 18, 1985, Genentech received approval from the U.S. Food and Drug Administration (FDA) to market its first product, a growth hormone for children with growth hormone deficiency. It was the first recombinant biotech drug to be manufactured and marketed by a biotechnology company.

The Path to the First Biotech Drug on the Market

In the early 1970s, biochemist Herb Boyer and geneticist Stanley Cohen pioneered a new scientific field called recombinant DNA technology. Upon learning about the technology, venture capitalist Bob Swanson placed a call to Boyer and requested a meeting.  By the meeting’s conclusion, Genentech was born, and Boyer and Swanson went on to found the company in 1976.  Although Swanson and Boyer faced skepticism from both the academic and business communities, they forged ahead with their idea to develop a new generation of therapeutics created from genetically engineered copies of naturally occurring molecules important in human health and disease. Within a few short years, Genentech scientists proved it was possible to make medicines by splicing genes into fast-growing bacteria that produced therapeutic proteins.

“I got an idea for [the commercialization of recombinant DNA technology] when my oldest son was tested for growth hormone. He was on the lower end of the growth curve, and the pediatrician wanted to test his growth hormone levels…It turned out he had normal levels of growth hormone. The pediatrician said that he felt he would grow to an acceptable size based on that, and even though he was in a lower percentile, it was nothing to get too worried about. I didn't even know that kids were treated with growth hormone to treat dwarfism. I think at the time I may have even told my wife, ‘You know, we could make human growth hormone; all we have to do is isolate the gene.’"

Today Genentech continues to use genetic engineering techniques and advanced technologies to develop medicines that address significant unmet needs and provide clinical benefits to millions of patients with serious or life-threatening illnesses worldwide.

As Genentech prepared to begin production of Protropin for clinical trials, we discovered we needed a manufacturing license from the State of California; in order to obtain the license, we needed a registered pharmacist on staff.  For less than one week, five employees crammed for the state pharmacist license exam (we hoped at least one would pass and the company could receive its manufacturing license).  All five passed.

While it was Regulatory Affairs’ responsibility to file the Investigational New Drug (IND) Application for Protropin, they accepted arms and legs of molecular biologists, protein chemists, QA/QC staff, and the CEO.  Virtually the whole company could be seen at odd hours photocopying, paginating and compiling Genentech’s first IND.  The application for Protropin was compiled into twelve 300-page volumes.

Genentech employees had to develop and then scale up the processes by which Protropin could be manufactured, recovered and purified in quantities sufficient for clinical trials and marketing.   For commercial production approval, five FDA auditors spent several days inspecting facilities, procedures, systems and equipment.  They made surprisingly few comments considering Genentech’s manufacturing plant was new and Protopin growth hormone was the first commercial product to come out of the facility.

Genentech’s Hallelujah Chorus heralded the FDA approval of Protropin growth hormone.  In an atmosphere of great celebration, Genentech entered a new era as a biotechnology company marketing its own product.

Genentech's Protropin® (somatrem for injection), the first product to be manufactured and marketed by a biotech company, ceased production in 2004 as demand shifted toward its successor, Nutropin® [somatropin (rDNA origin) for injection]. View indications, safety and package insert for Nutropin.

Genentech is committed to ensuring price is not a barrier to access for patients. Learn about our programs. 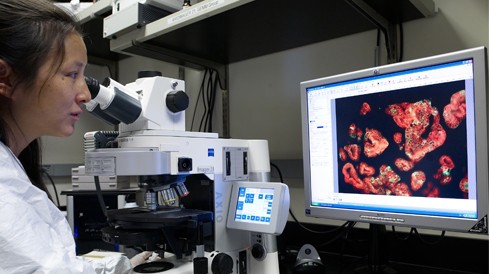 As the first biotechnology company, Genentech is an industry leader with an impressive history of firsts in medicine.
© 2022 Genentech, Inc. All rights reserved. This site is intended for US residents only.