We are actively responding to the global COVID-19 pandemic. For more, please visit our COVID-19 response page, or call 1-877-436-3683. See the latest update on Actemra® (tocilizumab) supply here.

Following our March 2009 merger with Roche, Genentech's South San Francisco campus became the headquarters for Roche pharmaceutical operations in the United States. All of Genentech's U.S. sites are united by our goal of meeting the needs of patients.

In the heart of the San Francisco Bay Area, Genentech's South San Francisco campus is a perfect environment for employees who want to feel close to big city life yet avoid common urban pitfalls such as long commutes and congested streets. Regarded as the "birthplace of biotechnology," South San Francisco is located on a peninsula and boasts beautiful views of the bay and a vibrant working-class community as well as numerous restaurants, parks and even a marina.

Featuring mild winters and dry, cool summers, the city is shielded from the legendary San Francisco fog by its hills to the west, but it's the proximity to San Francisco's striking skyline that really makes South San Francisco a wonderful place to live or to work. Easily accessible via all Bay Area transportation methods, but featuring great affordable neighborhoods and its own welcoming air, South San Francisco is an ideal location for Genentech's headquarters. 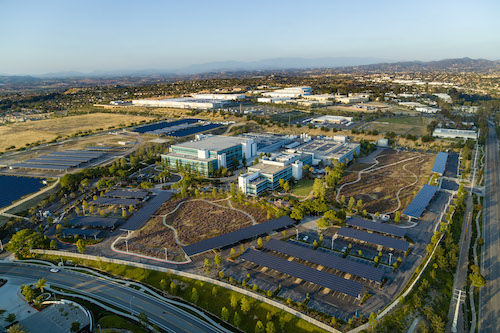 On the Southern California Coast, halfway between Los Angeles and San Diego, Oceanside is a beautiful beachfront community of roughly 200,000 people. As one of Oceanside's largest employers, Genentech takes great pride in the impact we have on the community, but also in the impact the community has on our employees.

Home to Camp Pendleton, the largest and most active military base in the United States, Oceanside is a charming town of shimmering waves, local surf flavor and 3.5 miles of white, sandy beaches. But it's also a vibrant and bustling modern community, offering you the best of what Southern California living is all about. Whether its heading north to Disneyland or for a Mighty Ducks hockey game, going south to see the San Diego Zoo or to check out a Padres baseball game, or staying inside the town limits and hanging out on the Oceanside pier, there are always countless things to do and an abundance of warm, sunny days to do them.

Midway between San Francisco and Sacramento, Vacaville is a great community for single people and families, with affordable housing, mild temperatures year-round and lush scenery, set against a backdrop of rolling hillsides and rich farmland. But it's so much more. As an employee at our Vacaville campus, you'll discover that working or living here means you're situated amidst all the wonders northern California has to offer.

Vacaville's central location means that you can enjoy day trips to local beaches or savor the renowned wines of nearby Napa Valley. Head east and revel in the immense beauty of Lake Tahoe. Stay inside city limits and enjoy the numerous opportunities for entertainment and culture - a play at the Vacaville Performing Arts Theater, hiking or fishing at Lagoon Valley Park or strolling through Vacaville's pleasant downtown district. But whether you're having a quick bite in the newly revitalized historic downtown, getting some serious shopping done at Vacaville Premium Outlets (one of the largest outlet complexes in California) or heading out on the road to discover new adventures, as a resident of Vacaville or one of its surrounding cities, you'll come to agree that being central brings all of life's opportunities closer to you.

Nestled between the mountains of the Cascade Range and the Pacific Ocean, Hillsboro is a historic city with small-town charm and a well-established technology center. Evidence of this duality can be found at Genentech's Hillsboro campus, which is located in a park-like setting that blends in nicely with the surrounding Hillsboro landscape. Offering a moderate year-round climate, Hillsboro is an ideal place for those attracted to a more rustic setting within close reach of a larger metropolis.

About 20 minutes drive from the big city amenities and urban sophistication of Portland, Hillsboro is literally the best of both worlds. If you enjoy the outdoors, you'll thrive in Hillsboro - spectacular beaches, skiing on Mount Hood, local golf courses and farmer's markets. Love the bustle of nightlife and citywide attractions? You'll also find yourself at home, perhaps taking in a Portland Trailblazers NBA game or gallery-hopping amid downtown Portland's art and culture scene. With its historic downtown center populated with new and old buildings, a hub for technology and culture, and its laid-back attitude within close proximity to a larger metropolis, Hillsboro does seem to have it all.

Sure, Louisville is known for its premiere horseracing, but it's actually home to much more. In addition to a stunning skyline and the nation's largest urban forest, you'll also encounter countless galleries and parks, a vibrant nightlife and pleasant neighborhoods. As Kentucky's largest city, Louisville has something to offer everyone.

Lauded for being one of the safest large U.S. cities, Louisville is also a well-planned metropolis, seamlessly incorporating an elegant blend of historic charm and contemporary offerings, while supporting a thriving art and culture scene and a revitalized downtown area. It's also one of the most well-connected cities in the United States, easily accessible via numerous private and public transportation methods and centrally located between major cities in all directions. Eclectic neighborhoods with new and old construction (including the largest Victorian neighborhood in the United States) round out a long list of attractive features of this grand southern city.