February 18, 2014 – Every year in the United States, 5-20% of the population becomes ill with the flu (influenza). Vaccination is the best way to reduce the chance you’ll catch seasonal flu and spread it to others. But due to constant changes in the flu viruses circulating worldwide, annual vaccination is necessary. This diversity in flu viruses makes fighting the flu a big challenge. Let me explain how the flu evades our immune system defenses, and what Genentech scientists are trying to do about it.

Two broad types of flu virus can cause severe illness in humans: A and B.

Influenza A is of greatest concern because it not only causes seasonal flu, but is also responsible for worldwide pandemics.

Influenza B doesn’t have as much genetic diversity as influenza A, and thus isn’t a pandemic threat. But influenza B still causes severe disease in the very young, especially premature infants, the immune compromised and the elderly.

Importantly, both virus types are included in the seasonal flu vaccine.

The different H and N subtypes are not all that define the diversity of flu viruses. As a flu virus replicates billions of times in an infected population, it slowly accumulates genetic mutations within the H and N proteins. Over time, these changes can affect the severity and contagiousness of a flu virus, and make it different enough that the immune system no longer recognizes that particular virus. This is called antigenic drift, and means that over time a virus can change enough to require a new vaccine. This also explains why a person can contract the flu many times over a lifetime.

From animals to humans and back

A second challenge with influenza A is that it not only infects humans, but also infects many other species, including ducks, chickens, pigs and horses. When humans are in close contact with animals, such as in poultry markets and pig farms, influenza A viruses circulating among animals have the opportunity to jump over to humans and back, potentially changing in the process.

When an animal or human is infected with at least two different influenza A viruses, the genetic code inside the viruses can be reshuffled to create an entirely new virus. This abrupt change is called antigenic shift and is responsible for creating new flu viruses that the human immune system has never been exposed to. This type of change increases the risk for a pandemic, as the majority of the human population will not have antibodies to fight the new virus and stop its spread. That’s what happened in 1918, leading to the “Spanish Flu” pandemic, which resulted in the deaths of an estimated 50 million people worldwide.

Unfortunately for humans, the immune system focuses its efforts on producing many antibodies against the highly variable “head” of the hemagglutinin protein to block that particular virus from infecting cells. This is the case regardless of whether the immune response is from natural flu infection or vaccination.

Because this head region of hemagglutinin changes over time, these antibodies are not protective against all strains of flu, making annual vaccination necessary. Fortunately, there are other antibody targets on the flu virus that don’t change so easily.

Research has shown there is a region on the “stalk” of the hemagglutinin protein that changes very little, so we say this region is “highly conserved” among all influenza A strains. We think this could be the proverbial “Achilles’ heel” of the virus. We are testing whether or not an antibody targeting this region may block the ability of all influenza strains to infect human cells, and not suffer from the challenges of antigenic shift and drift (see illustration). 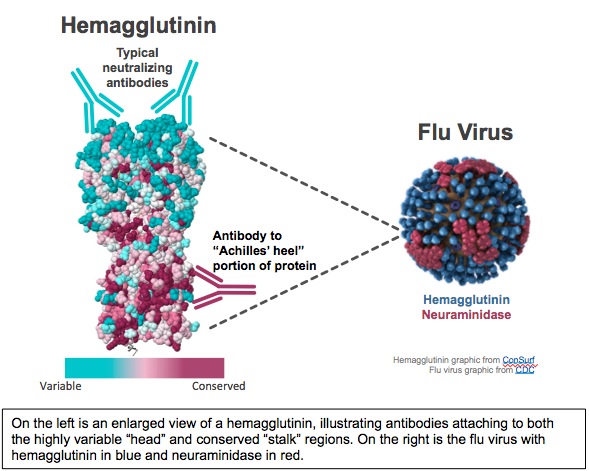 To pursue this idea further, we needed two things: human blood samples to search for these rare stalk-binding antibodies, and a new method for identifying them within the blood samples. The first was easy, with the help of some Genentech employee volunteers. Employees who received the seasonal influenza vaccine agreed to return a week later to give a blood sample. It was within these samples that we hoped to find these rare antibodies that bind the highly conserved region of hemagglutinin.

The second need was more difficult. Older antibody screening techniques suggested that we would need to sort through hundreds of thousands of antibodies to find ones that bind to the “Achilles’ heel” portion of the protein. This would be extremely labor and time-intensive, so our lab had to develop a new technique to identify them more efficiently. In our case, we developed a technique to enrich and sort for antibodies that only bind to the stalk region and not to the variable head region of hemagglutinin. Ultimately, we discovered two of these rare antibodies, after screening just 840 potential antibodies.

Fortunately, Genentech already had the technology to reliably produce these newly identified antibodies in large enough quantities to begin studying them in clinical trials.

One of those antibodies has completed Phase I testing in healthy volunteers, and Phase II testing in people infected with influenza A is underway.