We are actively responding to the global COVID-19 pandemic. For more, please visit our COVID-19 response page, or call 1-877-436-3683. See the latest update on Actemra® (tocilizumab) supply here.

The Process of Macular Degeneration

While the exact cause of AMD is not known, the disease process begins when the transport of nutrients and waste products via the retinal pigment epithelial cells (RPE) begins to slow down, leading to the accumulation of waste products. 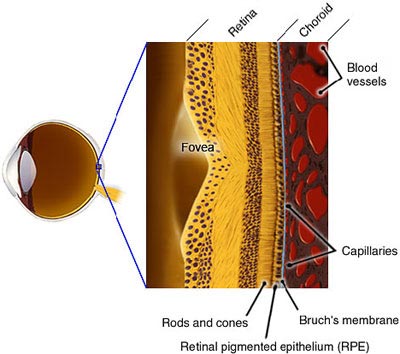 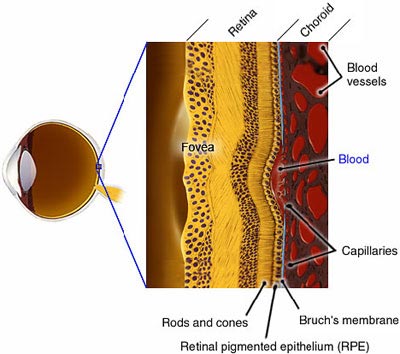 Dry AMD tends to progress more slowly than the wet form and is likely to cause severe loss of central vision or legal blindness in 15 percent to 20 percent of affected individuals. There are no treatments approved for dry AMD. In dry AMD, as the waste products build up, retinal cells near the drusen begin to die, leading to a loss of function in that area of the retina. In some cases, a large area of cells will die, creating a blind spot in central vision. 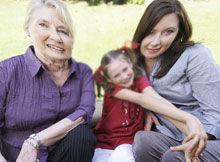 Wet AMD progresses more rapidly, and approximately 90 percent of affected individuals will advance to loss of central vision and be deemed legally blind. In wet AMD, the majority of damage to the retina occurs when new blood vessels begin to grow from the choroid up to the RPE and beneath the retina (a process known as choroidal neovascularization [CNV] or ocular angiogenesis). While the exact cause of CNV is unknown, the current hypothesis is that neovascularization is prompted by the build-up of waste products, diminished function of the RPE, reduction in oxygen concentration and inflammation. These new blood vessels are permeable, allowing blood and fluid to leak into the retina. This leakage may cause the retina to become swollen, impairing function of the retina and leading to poor or distorted central vision, as depicted below.

The growth of these new blood vessels may evolve into a scar, which can create a permanent blind spot in central vision.

Due to the rapid progression and severe, irreversible loss of central vision associated with wet AMD, early diagnosis and treatment are important for the successful management of the disease. Drusen can be detected by ophthalmic examination prior to the development of AMD. A simple tool, known as the Amsler grid, can be used to assess visual changes such as optical distortion or loss of vision. 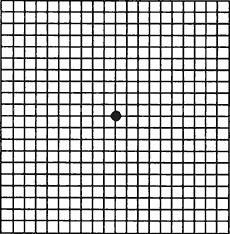 Amsler Grid as Seen Through Eyes With Wet AMD 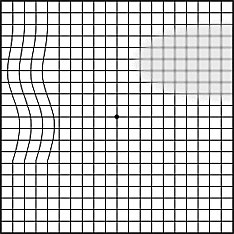