Bob woke at 2:00 am. He threw the covers back — his nose was bleeding yet again, he was sweating, and pains shot through his legs. Dizzy, he stumbled to the bathroom and cleaned himself at the sink; the mirror showed his drawn face and hairless scalp. He returned to bed, where his wife was changing his soiled pillowcase. As he put his head down, he told her, “The only good news is that I haven’t had to shave in months.”

In 2011, Bob would have told you that his health was good — up until that November, when he awoke with pain radiating downward from his neck. Suspecting a heart attack, the emergency room doctor ordered tests. No problems with his heart, but the CAT scan identified a mass in his chest, and the follow-up biopsy showed it to be a malignant cancer. Bob asked his doctor about his prospects: “Sixty percent die in the first year, half the remainder in the second year, and very few survive the third year.” Those odds weren’t good.

The techniques that pathologists use to diagnose lung cancer and help oncologists determine treatment have changed as we have learned more about the underlying biology of the disease. 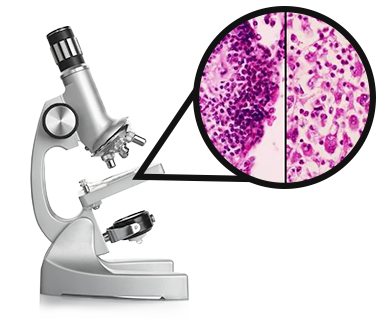 For many years, the only distinction doctors could make was whether a person had small cell or non-small cell lung cancer based on the size of cells in a tumor sample viewed under a microscope.

Now, lab techniques called immunohistochemistry and fluorescence in situ hybridization are used to find specific genetic or protein biomarkers in a tumor sample to determine if a targeted treatment is appropriate. 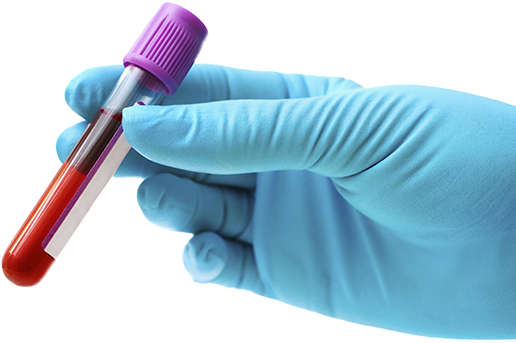 In the future, less-invasive diagnostics using blood plasma or saliva could help overcome the challenge of having limited tumor tissue to test as more personalized treatment options become available.

Bob cried for four days, then leaned on the philosophy that has guided him since he was 26 years old — Zen Buddhism. He wasn’t religious, but he read widely, searching for a way to organize his life. The more he read about Zen, the more it made sense to him. There’s no church or temple for Zen — the central belief, Bob says, is that “You deal with the world as it is. You’re responsible for your own happiness and you should help others find their happiness.” He considered his situation and told himself, “Nothing has changed. Same me, same world, I just have new information.” He had to make some hard decisions: he refused lung removal and radiation, but he agreed to chemotherapy.

He considered his situation and told himself, “Nothing has changed. Same me, same world, I just have new information."

Bob grew up in the suburbs near Stamford, Connecticut. During high school, he hunted and hiked with a close friend; after graduation, he joined the Marines.

He’s 72 now, and he started smoking at age 10 or 11 — he bought cigarettes at the candy store for 20 cents a pack, the same price as four Snickers bars. He smoked a pack and a half every day until ten years ago, when his doctor warned him that he showed the beginning stages of emphysema. He quit cold turkey.

Not all lung cancer is caused by smoking, and Bob had other risk factors — heavy exposure to second-hand smoke for 16 years in his last job, and he had worked for years around asbestos in a printing plant.

But if you ask him, he believes smoking caused his cancer.

“There’s a stigma to lung cancer compared to other diseases,” Bob says. “Lung cancer ribbons and runs do exist, but they don’t get the same support as, say, breast cancer. Society’s attitude to lung cancer patients is ‘You brought it on yourself’.”

A Visual History of Lung Cancer

Bob doesn’t remember any specific warnings about lung cancer when he was a boy; he watched “I Love Lucy,” sponsored by Phillip Morris, and he saw magazine ads that proclaimed “More doctors smoke Camels than any other cigarette.” Even then, however, he knew cigarettes weren’t good for you; he and his friends called them “cancer sticks” and “coffin nails.”

But then the official warnings appeared: the Surgeon General’s report hit the news when Bob was 21, then came labels on cigarette packs, then Nixon’s war on cancer. Bob ignored them all. He enjoyed cigarettes, and he looked at the dangers the way a bookmaker might: “Sure, nine out of ten lung cancers are among smokers, but five out of six smokers never get lung cancer.” He figured the odds were in his favor.

And he thought exercising would counteract smoking’s dangers. He ran eight to 13 miles a day, and on the days that his schedule was tight, he strapped on 20 pounds of arm and leg weights and ran only five miles.

The chemotherapy that followed Bob’s diagnosis held his cancer in check. Despite the debilitating side effects, he stuck with it until a TIA — a mini-stroke — alarmed his medical team into ending that treatment. Chemotherapy was no longer an option, but Bob’s doctors told him that great progress was being made in cancer research: T-cells, an important component in the body’s immune system, seek and destroy cancer cells. But some cancers are able to block the T-cells’ attack, and research scientists were working on “immunotherapy” treatments — drugs that might help T-cells overcome cancer cells’ defenses.

“You need a good medical team. Not just a single doctor, because it’s a very complicated disease. Once you’ve got the team lined up, listen to them. But don’t make your whole life about cancer. Live.”
— Bob

There was a hitch: immunotherapy drugs hadn’t been proven or approved, and they were highly specific — designed to work on particular cancers. And even if they did work, they might not work the same for everyone.

A clinical trial at Yale, near Bob’s home, was underway for an immunotherapy treatment. To qualify for the trial, Bob would need to show he had the right “biomarkers”— that is, that his cancer and immune cells had the right molecular tags for that particular treatment.

Bob sweated it out while he waited for the test results. Did he have the right biomarkers? When the report arrived, the answer was somewhere in the middle: his biomarkers were close to a match, but not quite there. The clinical trial’s managers went back and forth on how close was close enough, and in September 2013 they made their decision — he was in.

Eighteen months after Bob entered the trial, he enjoys bird watching with his wife, Julia; they’ve chased birds in Mexico, Ecuador, and Costa Rica. Bob’s interest in birds had started at age six, when his mother mounted a bird feeder in their back yard. Bird watching is a meditative hobby that supports his Zen practice, but Bob can be as compulsive about birds as he was about running — “How many people would drive 150 miles through snow for a chance to photograph an owl?” He looks for rare birds with the same intensity that research scientists pursue new cancer treatments.

He looks for rare birds with the same intensity that research scientists pursue new cancer treatments.

Bob’s now counseling others who have received recent lung cancer diagnoses. “You need a good medical team,” he advises them. “Not just a single doctor, because it’s a very complicated disease. Once you’ve got the team lined up, listen to them. But don’t make your whole life about cancer. Live.”

Bob knows there are no guarantees—the clinical trial is still underway, and his cancer may change in ways that make the treatment ineffective. He follows a Zen path: he wakes up each morning, shaves mindfully, and knows that, at least for now, he’s beating the odds. 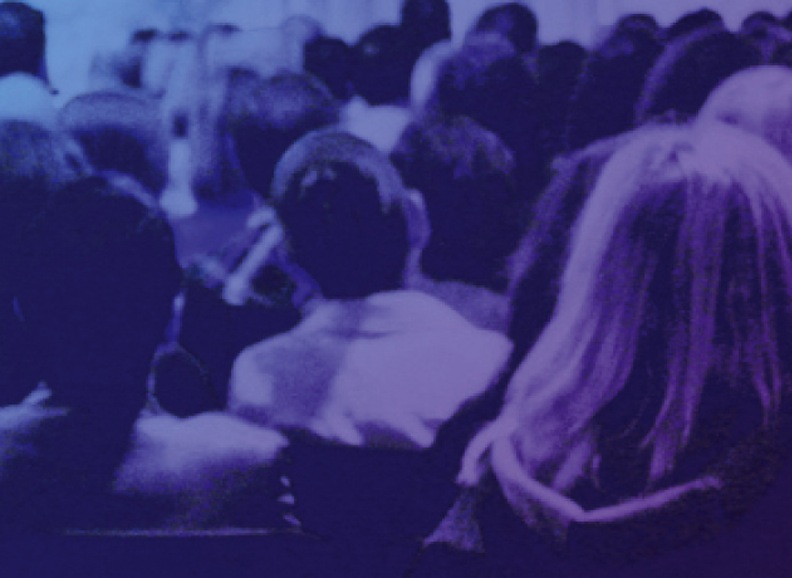 The American Society of Clinical Oncology

ASCO spotlights what’s next in cancer research and treatment. We’ve gathered perspectives from around the cancer community on topics people will be talking about at the meeting. 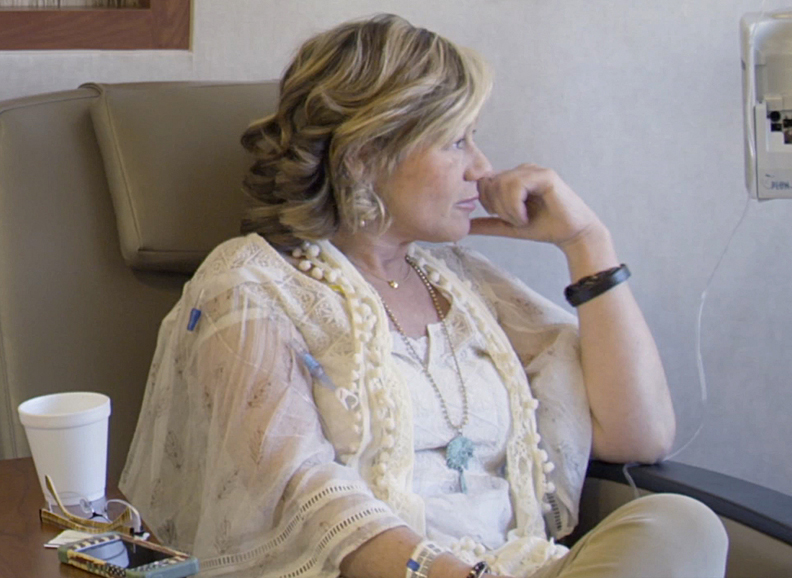 The HER2 Journey: The inside story of a breast cancer breakthrough, 30 years in the making. 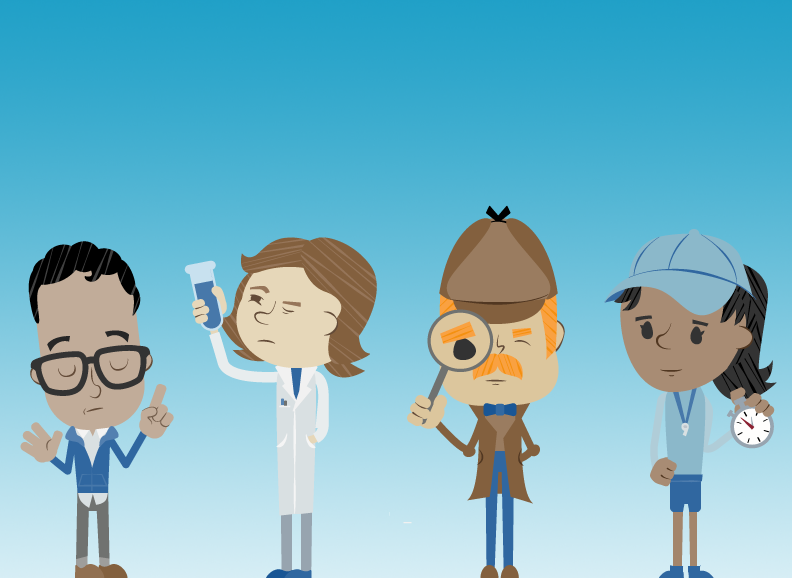 The Evolution of Endpoints

Progress in the fight against cancer has created a paradox when it comes to clinical trials.